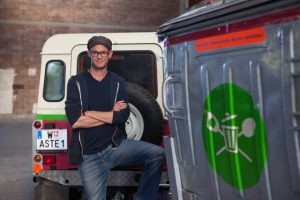 A car that runs on used vegetable oil, a mobile stove and a host of culinary ideas in his backpack: Wastecooking – Make Food, Not Waste is an entertaining road movie detailing a journey through five European countries, where the only thing on the menu is what others call garbage. David, the host of Wastecooking – Make Food, Not Waste, whips up creative meals aimed at fighting food waste and our consumption-driven society, and at the same time inspire us to search for creative solutions.

David Gross travels through five European countries on a quest for treasure. According to the UN’s Food and Agricultural Organization FAO, one third of all food produced around the world ends up in the garbage, roughly 89 million tons of food a year in Europe alone. David seeks out places where waste happens and asks: How can we save food that would otherwise go to waste and transform it into delicious recipes? Austria, Germany, the Netherlands, Belgium and France are all on the menu.
On his journey he rescues food from becoming trash, and in every country he meets committed activists with ideas on how to combat waste. On board are gourmet chefs, scientists and connoisseurs who team up to create sumptuous waste cuisine in protest against our consumption-driven society. David gets a look behind the scenes of the European Parliament’s cafeteria and even the refrigerators of everyday residents of the city of Salzburg. He cooks up a fresh bouillabaisse made from by-catch on a French fishing boat, invites people to participate in a “Schnippeldisko” in Berlin and combs Mother Nature for edible delectables. All the while, he compiles an innovative culinary travel guide with clever and delicious meals made from all sorts of rescued and collected food. With him on his journey is his trademark garbage dumpster, which he rebuilt into a mobile cooking stove, and his wastemobile, which only runs on used vegetable oil.
Wastecooking – Make Food, Not Waste is a biting self-experiment. It also offers inspiration for embarking on less travelled paths and getting to know and appreciate food from a different angle. And naturally for transforming it into creative dishes.

In cooperation with
SWR/ARTE
ORF

The trashcan was rebuilt into a kitchen by the artist Andreas Strauss.