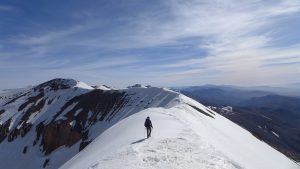 From the first high mountain to the sea, that’s the plan. Along the main chain of the High Atlas, a five-headed Austro-Moroccan mountaineer group sets out to cross the highest mountain chain of North Africa in length. Along old mule trails, the route leads not only into breathtaking high mountain landscapes and across six 4000m summits, but also to the traditional clay villages of the Atlas Berbers. The encounters with the people in the valleys are just as part of the journey as the remote expanse of the snow-capped peaks and elevations of the Atlas Mountains.